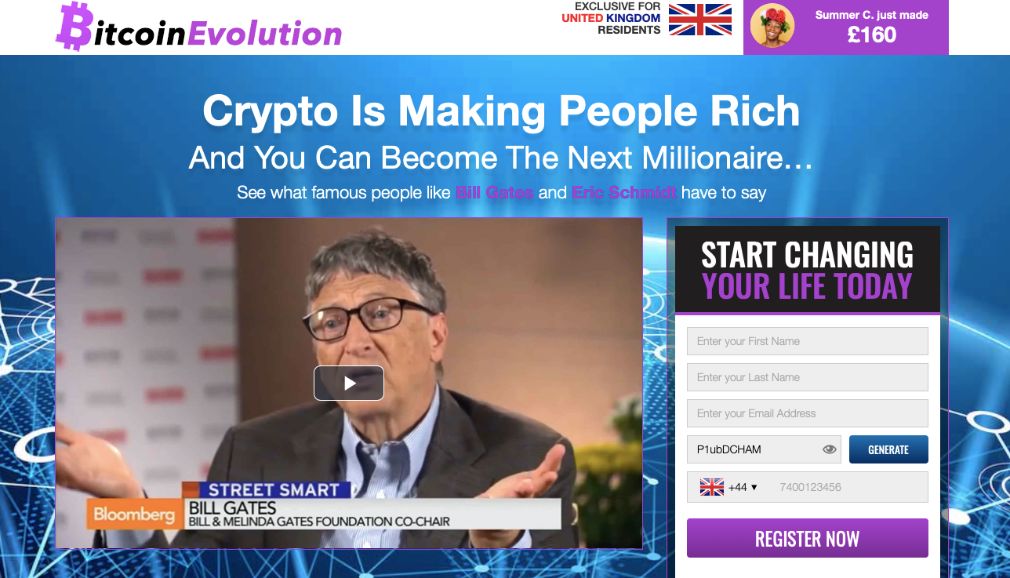 What is Bitcoin Evolution?

Bitcoin Evolution is marketed as a “group reserved exclusively to people who jumped on the insane returns that Bitcoin offers and have quietly amassed a fortune in doing so”. They also claim they have a trading app which performs at a 99.4% level of accuracy. In reality, there is NO software and you are being setup to take the bait as a fake broker is waiting for you on the other side to steal your money.

Welcome to our official Bitcoin Evolution review and scam investigation. The Bitcoin Evolution SCAM software does not really answer to the criteria of a trading software, app, or automated bot at all. In fact, this bogus investment platform is what we refer to as a “chain scam” or a kind of copy/paste cloned scam which is commonly used by affiliate networks who wish to promote dirty get-rich-quick schemes. Why do they do that? Well, these online promoters receive kickbacks (bribes) in the form of affiliate commissions every time you invest. So, the whole intent of this fraudulent scheme is to entice you and get you signed up with a a rogue offshore Broker. In our case it was Prestige Financial Markets which is owned by AllProTech OÜ and have a registered business address in Tallinn Estonia. Originally when we started out testing this software, it was due to various complaints we received in regards to the hideous nature of this latest scheme. However, as we continued to collect evidence we understood just how dangerous the Bitcoin Evolution scam really is, and why it should be avoided at all costs. Still believe the Bitcoin Evolution is a legit trading app and want to invest? Before you risk your hard-earned money we highly recommend you read our detailed Bitcoin Evolution review and see exactly how we exposed the crooks behind it.

Evidence of SCAM
Below you can see the main sales page and registration area for the Bitcoin Evolution Scam software. Right below it we have taken screenshots of the Bitcoin Trader, Bitcoin Secret, and Bitcoin Formula scams. It’s very plain to see that the presentation including the actual sales video is identical and copied verbatim thus validating our initial assertions.

Moving along, when we signed up and tested this software we found out that the brokers involved in this highly manipulative game of deception and trickery, are the same ones which are involved with the previous scams we discussed above. Here you can also see that with Bitcoin Secret Cryptonix Team was the selected broker, and with Bitcoin Evolution its Prestige Financial Markets which by the way is blacklisted by the UK Financial Conduct Authority for providing financial services or products in the UK without proper licensing.

Crypto Is Making People Rich And You Can Become The Next Millionaire! Does that sound familiar? Well, it should because its the first thing which pops out at the Bitcoin Evolution sales page. Are you an opportunity seeker looking to cash in on the next “big thing”? Well in that case the Bitcoin Evolution was designed especially for you. Again, we have fake claims about how their exclusive group of millionaires enjoy retreats across the world and how they work a few hours a day without having any type of financial stress. That is extremely manipulative, misleading, and deceptive but also exactly how the software is presented to us.

Laser-accurate Performance: Again, they are re-hashing the 99.4% accuracy level angle.
Superior Technology: Beat the market rates in 0.01 seconds and execute “no-risk” trades on auto-pilot.
Award Winning Trading App: Guess what, there is no award granted by the US Trading Association (which does not exist).

How Does the Bitcoin Evolution SCAM Work?

Three simple steps about signing up, funding your account and voila! You are the newest millionaire so welcome to our club. Right? WRONG! In reality you are being illegally solicited to join a fraudulent get-rich-quick scheme and you can bet your bottom dollar that the second you signup you will have an army of sleazy sales reps with a strange accent calling you up and telling you to deposit more money than you can possibly afford.

Take a wild guess. Get ready to part with at least $250, and that money will be charged to your credit card by thieving offshore brokers who could care less about your financial situation and will do their utmost to steal your hard-earned money.

Actually, we are the first to expose this thieving chain-scamming app so there are no reviews AT ALL in regards to this scheme. However, we are sure that eventually some fake reviews site will get paid to endorse this phony investment platform and that is when we will be here to call their bluff!

The Bitcoin Evolution SCAM is now using a variety of methods in order to recruit new customers, and fake news (mirror sites) is the most popular with scammers. Here we see the cynical and illegal use of Piers Morgan who is a British TV broadcaster and journalist (see image below), but there are also documented cases where other celebrities and high-profile individuals are used for promotional purposes. Most commonly used are Elon Musk, Richard Branson, Conor McGregor, Vincent tan, Andrew Forrest, the cast of the Dragon’s Den, Shark Tank, Australian TV presenters Karl Stefanovic and Waleed Aly, Jeremy Clarkson, Giannis Antetokounmpo, Andy Lau, Li Ka-Shing, and also politicians such as Cyril Ramaphosa, Gavin Duffy or Jacinda Ardern. 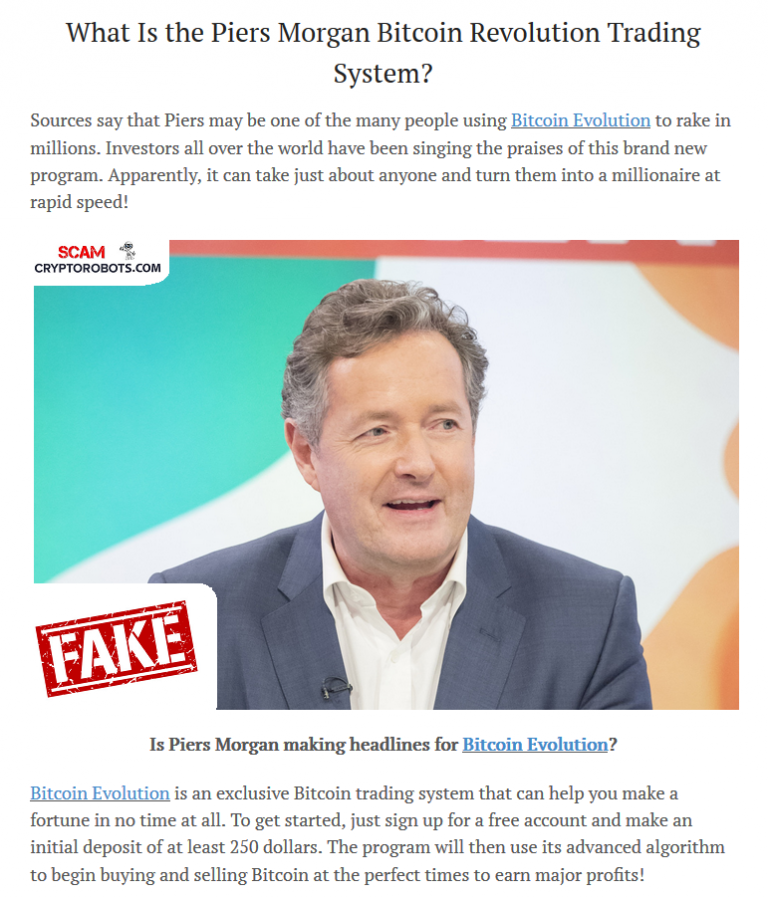 The use of fake news is becoming more prevalent with scammers who are crafty and always find clever ways to bait unsuspecting victims. We urge you to use your common sense and always inquire before investing.

If after reading all we had to say, for some unknown reason you still feel an urge to test the waters and fund a real money trading account, then you should probably avoid online Forex trading altogether. Your money will be lost and that is a guaranteed fact.

We are guessing that right about now you are looking for some viable options so we short-listed a few cash-producing apps which have withstood the test of time. These systems can be found in our recommended section, so why not take a minute to check it out.

The Bitcoin Revolution SCAM software, App, and fake trading bot is BLACKLISTED and it’s pointless to try and prove otherwise. If you have been solicited via email marketing SPAM or some form of fake news advertisement asking you to join this “new and profitable new software”, then you should know that you are officially being targeted by crafty affiliate networks which are gunning for your wallet. In addition to everything else, its also critical for you to understand that the crooks behind this shady scheme are well-known in the industry for defrauding unsuspecting victims and have been exposed numerous times. This company has a headquarters in Cyprus and additional offices in Malta and other Middle Eastern countries. This means its a well-oiled and heavily financed operation so make sure to hold on to your credit card and never divulge any type of sensitive financial information. For additional information, we can always be contacted via our YouTube Channel, Facebook Group, and G+ profile.